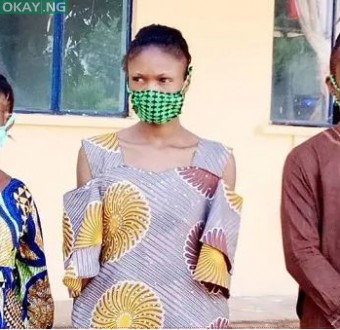 The Kwara state police command has successfully nabbed a 24 year old school teacher named, Medinat Ibrahim for allegedly planning a self-kidnapp in order to extort 250,000 naira from her dad.

Medinat was arrested together with two others identified as, Amudalat and Hammed Lekan. She confessed that, she hid in her sister’s (Amudat) place and Hammed ( a friend) called her dad & said she’s kidnapped and demanded a ransom of N250,000.

Medinat said, she did that to pay the debts that she’s owing in a school monthly contribution they do.

I teach in a private school where I was paid N15,000. We organised monthly contribution which I collected and invested in a business, but when COVID-19 broke out, our salary was stopped, I could no longer continue with the contribution.

“Those who were in the group continued to mount pressure on me to pay up my own contribution and there is nowhere that I could get the money. So I decided to go and hide in my sister’s place and I told someone to call my father on phone that I was kidnapped and demanded a ransom of N250,000 which was paid to my friend’s account.” said Medinat.