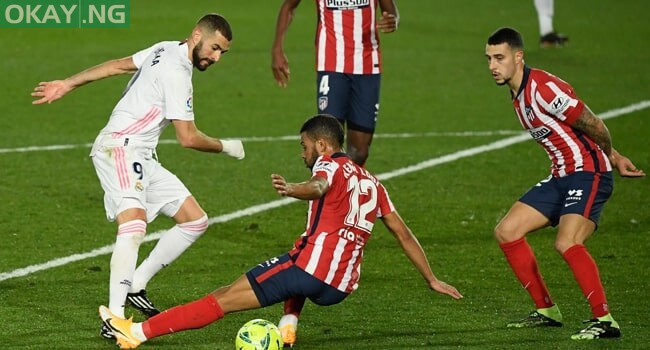 Real, who salvaged their Champions League campaign in midweek by making the last 16, moved to third in the table, three points behind Atletico.

It was a disappointing night for Diego Simeone’s side who had boasted a 26-match unbeaten run in the league, stretching back to February.

Zinedine Zidane’s team were in front after 15 minutes when Casemiro headed home a corner from Toni Kroos.

That was reward for Real’s early pressure which had seen Karim Benzema denied by a fine save from Jan Oblak moments earlier.

Atletico, who also made the Champions League knockout round in midweek, struggled to make any impression and star striker Luis Suarez was an anonymous figure up front.

Real went 2-0 up after 63 minutes with Kroos again the provider.

His pass eventually fell for Dani Carvajal who unleashed a 30-metre drive which hit the post but was diverted into the net by the helpless Oblak.

The ‘keeper was credited with an own-goal for his troubles.