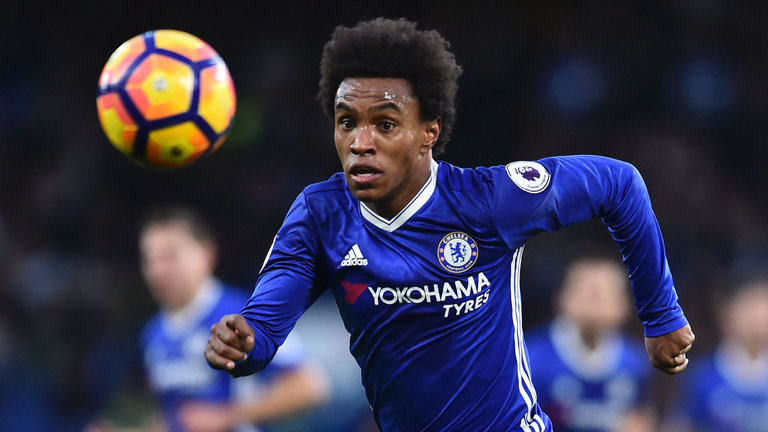 Chelsea wideman Willian has insisted he wants to remain at Stamford Bridge, and will reject any offers to leave this summer.

The 28-year-old Brazil international arrived at the Blues in 2013 from Russian Premier League side Anzhi Makhachkala for £30m, and has gone on to play 180 games for the club and notch 31 goals.

Despite scoring eight times in the Premier League this year, the most in his four-season spell, Willian has only started 15 PL games this term and had been linked to a reunion with ex-boss Jose Mourinho at Manchester United.

“Yes [I will be a Chelsea player next season],” Willian told the Evening Standard . “I have a contract with Chelsea until 2020 and I am very happy here.

“I have a great relationship with all the people that work at Chelsea and the fans too. They have been great to me since I joined.

“Chelsea are back in the Champions League next season and I am looking forward to playing in it again. It is a big, big target for us and we have to look to win that trophy next year.”

Having already collected the Premier League title, Chelsea could make it a league and cup double in manager Antonio Conte’s maiden season in charge with victory over Arsenal in the FA Cup final this Saturday.

Chelsea are preparing for the FA Cup final, and are in great spirits if Diego Costa and Eden Hazard’s antics are anything to go by
Securing more silverware is at the forefront of all the Chelsea players’ minds, adds Willian.

“We want to end the season with the Double,” he said. “We have the Premier League but we want the FA Cup too.

“This is a big game for us. It will be difficult against Arsenal and we have to be ready.

“We have to be focussed and play in the same way we have all season.”