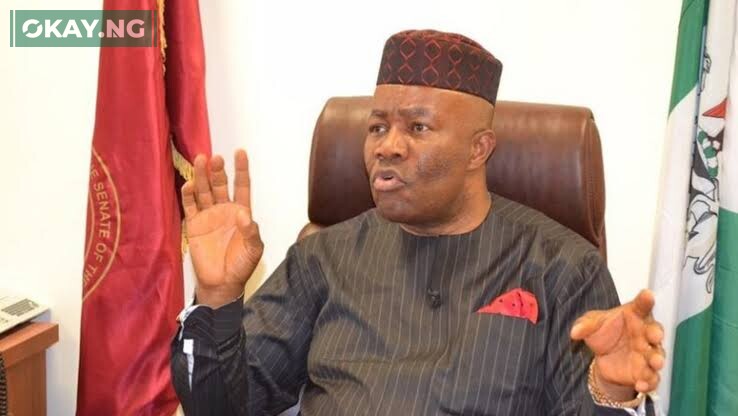 Former Minister of Niger Delta Affairs, Senator Godswill Akpabio, has described as laughable attempts by paid agents of some faceless politicians in Akwa Ibom State to drag him into the current ordeal between the Young Progressives party governorship candidate, Senator Bassey Albert, and the Economic and Financial Crimes Commission.

The former governor of Akwa Ibom State stated this on Friday, while reacting to publications in some social media platforms alleging his involvement in the YPP governorship candidate judgement delivered on Thursday.

Okay.ng had reported that the YPP governorship candidate who is the Senator representing Akwa Ibom North-East (Uyo) Senatorial district at the national Assembly was sentenced to 42 years in prison for corruption in a case instituted against him by the EFCC.

However, Akpabio, in a statement by his Chief press secretary, Mr Jackson Udom, in Uyo, the state capital said he is saddened by the development, adding that those who did knew why they did it.

The statement reads in part, “Our attention has been drawn to a very misleading and mischievious article currently being circulated in the social media by paid agents of some governorship candidates, which attempts to drag the name of former governor of Akwa Ibom State, Senator Godswill into the committal into prison of the Senator representing Uyo Senatorial District, Senator Bassey Albert by the Federal High Court sitting in Uyo.

“Attempts by some ill-informed fellows to point accusing finger at the former Senate Minority Leader in a matter he knows nothing about is to say the least, unfortunate, preposterous, and blackmail taken too far.

“For the records, Senator Akpabio was not even aware that Senator Bassey Albert had any existing case with the Economic and Financial Crime Commission not to talk of having knowledge of the facts of the matter. He was shell shocked when news filtered in that the YPP Governorship candidate had been sentenced to 42 years in prison. Those who did this, know why they did it.

“It is nonsensical for the author of this piece of blackmail to admit in one breath that Mr Leo Ekpenyong had similarly written petitions against Senator Akpabio and in another breath claim that the former Governor armed him with documents to nail Senator Bassey Albert Akpan.

Did Akpabio also give Leo Ekpenyong documents to write the petitions against himself?

“We want to state for the umpteenth time that the former Minister has no hand nor any knowledge of what Senator Bassey Albert was battling with until yesterday when the news of his imprisonment became public knowledge.

“If anything, Senator Akpabio is sad and he is praying and hoping that the Uyo- born Senator will be exonerated from all the charges at the higher courts in the land.”