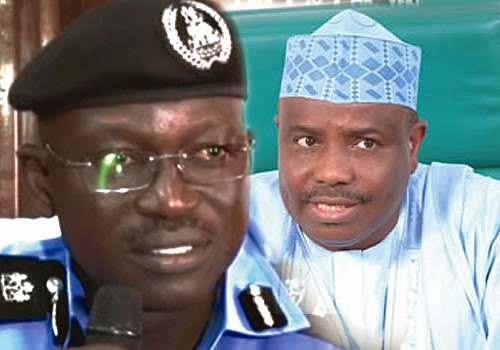 The drama  is still on after the law makers jumped fence..it took another dimension yesterday when The Inspector-General of Police, Mr. Suleiman Abba, was adamant, refusing to recognize the Speaker of the House of Representatives, Mr. Aminu Tambuwal, as the speaker.

The IG simply addressed him as “Alhaji Aminu Tambuwal”, a title that angered members of the House Committee on Police Affairs.
Abba insisted that it would be “subjudice” for him to address Tambuwal as speaker or any matter relating to him so long as such a matter was in court.Chairman of the House committee, Mr. Usman Bello-Kurmo, asked him a direct question, “Is Aminu Waziri-Tambuwal the Speaker of the House of Representatives or not?”

The IG replied, “Mr. Chairman, you know that matters before the courts are subjudice.

“Commenting on them is subjudice until they are disposed of.”

The response brought the session between Abba and the committee to an abrupt end, as the two parties stormed out of the venue.

The committee, acting on a House resolution, had summoned Abba to explain why the police shut the gates of the National Assembly against lawmakers on Thursday last week.

During the closure, Tambuwal and many lawmakers were disallowed entry by the police, resulting in violent reactions by the members.

In the process, many of them scaled the gates to enter the premises and later forcibly took the Speaker into the House.

As the Wednesday’s meeting was about to start, Bello-Kurmo called for maturity, saying that the interest of the country must prevail at all times.

However, speaking on what transpired last week, the IG justified the police action.

He maintained that all those the police restrained from entering the National Assembly were “thugs.”