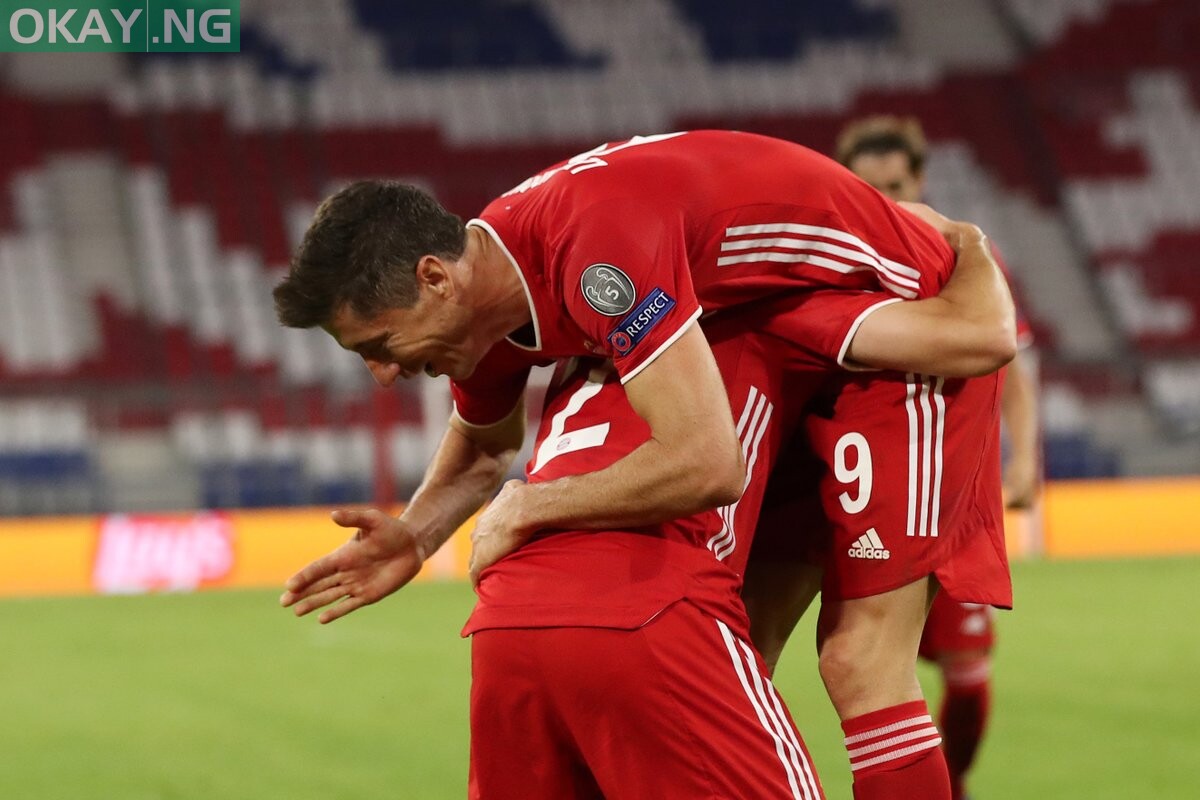 Treble-chasing Bayern Munich are relishing their Champions League quarter-final against Barcelona in Lisbon after Robert Lewandowski netted twice to seal a 4-1 home win over Chelsea on Saturday in the last 16, return-leg tie.

“The anticipation is enormous. Barcelona has a good team with very good players, but if you look at the last few weeks, we can fly to Portugal with a lot of confidence,” said Bayern defender David Alaba.

Lewandowski, the Champions League’s top-scorer, bagged his 12th and 13th goals in Europe this season and played a part in all four Bayern goals in Munich on Saturday.

Leading 3-0 from the first leg at Stamford Bridge in February, before the coronavirus pandemic halted the competition, Bayern progressed 7-1 on aggregate.

“We can be pleased, it was our first game for a month and it’s not easy to keep the rhythm,” added Alaba.

“We have prepared for this for the last two weeks and you could see the result.”

The Bundesliga and German Cup champions will meet Barcelona next Friday in Lisbon for a place in the semi-finals.

Lewandowski netted a penalty with just 10 minutes gone at the Allianz Arena.

However, replacement midfielder Corentin Tolisso put the result beyond doubt when he fired home a Lewandowski pass with 14 minutes to go.

“I am really happy with how we played over the 90 minutes, the first 30 minutes we shut Chelsea out,” said Bayern head coach Hansi Flick.

This was a world-class display from Lewandowski who added a late header to his pair of assists.

“He made two goals and showed how the team is working for each other, which pleases me as much as the result,” added Flick.

After a ruthless display in the first leg, Bayern picked up where they left off six months ago.

They took the lead when Serge Gnabry, who scored twice in London, spotted the run into the box of Lewandowski, who was tripped by Chelsea goalkeeper Willy Caballero.

Caballero was booked and Lewandowski converted the resulting penalty for his 12th goal in seven Champions League games.

He turned provider on 24 minutes as Bayern kept up the pressure.

After Mateo Kovacic lost possession near the halfway line, the ball was worked to Lewandowski who squared for Perisic to fire home.

Callum Hudson-Odoi, who was linked with a move to Munich at the start of the season, beat Manuel Neuer on 28 minutes only for the goal to be ruled out by VAR for an offside.

However, Chelsea pulled a goal back just before half-time.

Bayern goalkeeper Neuer could only parry a shot by Hudson-Odoi and Abraham tapped home the loose ball on 44 minutes to make it 2-1 at the break.

Mason Mount forced Neuer into a low save early in the second half, while Bayern lost defender Jerome Boateng to a leg injury with an hour gone.

He was replaced by Niklas Suele as Perisic made way for Brazil playmaker Philippe Coutinho.

It paid off two-fold as moments later Tolisso, on for Alcantara, made it 3-1 when he turned home Lewandowski’s pass on 76 minutes.

Alvaro Odriozola, on for Kimmich, then supplied the silky cross on 84 minutes which Lewandowski headed home for his 53rd goal in 44 games this season.