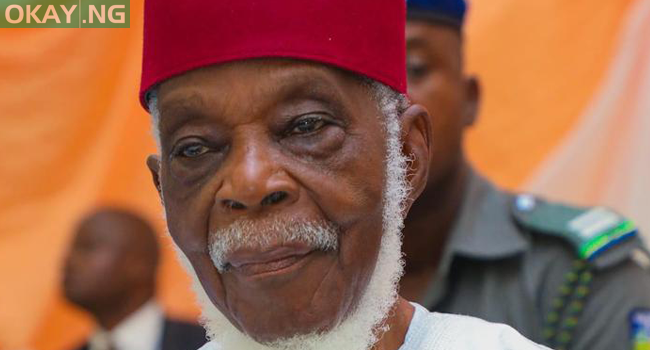 In a statement issued by his spokesman, Femi Adesina, on Thursday, Buhari described Fasanmi’s death as a big loss to the country.

“President Muhammadu Buhari joins Yoruba socio-cultural and political organisation, Afenifere, in mourning the passing of Pa Ayorinde Fasanmi, describing his death as a big loss to the nation.

“The President condoles with people and government of Osun and Ekiti States, family members, friends and associates of the elder statesman, who served as a legislator in both House of Representatives and Senate and distinguished himself politically by always standing for the truth, especially on issues related to the uplifting of the downtrodden.

“President Buhari affirms that Chief Fasanmi’s wise counsels borne out of humility, deep reflection, diligent studies and experience will be sorely missed by governments at different levels, as he regularly and willingly listened to leaders, and always had a good advice on going forward.

“As an ardent follower and prodigy of the late sage, Chief Obafemi Awolowo, the President believes the fearless and consistent leader of the Yoruba socio-cultural and political organisation lived to serve his people and the nation, and the progressive ideals that he projected impacted greatly and provided a road map on development at state and federal levels.

“President Buhari notes, with commendation, that the efforts of Chief Fasanmi in the founding and sustenance of Nigeria’s democracy will be remembered, and posterity will be glad for his great sacrifices.

“The President prays that the Almighty God will receive the soul of the departed leader, and comfort his family.”