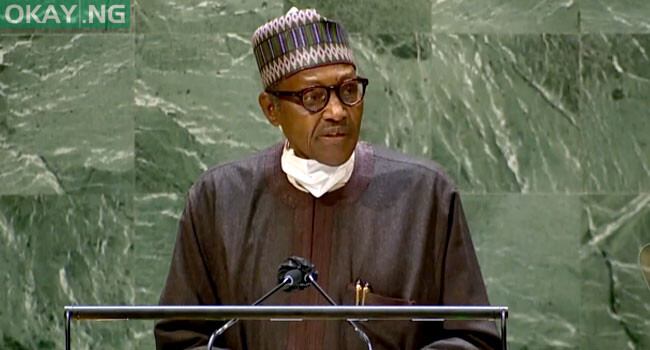 President Muhammadu Buhari on Friday urged world leaders to reject the recent trend of unconstitutional takeover of power, sometimes in reaction to unilateral changes of constitutions by some leaders.

The president made this call in his speech at the 76th Session of the UN General Assembly on Friday.

Buhari warned that the democratic gains of the past decades in West Africa ”are now being eroded” due to these negative trends.

“As leaders of our individual Member-States we need to adhere to the constitutional provisions of our countries, particularly on term limits. This is one area that generates crisis and political tension in our sub-region,” he affirmed Nigeria’s support to efforts by ECOWAS, AU and the UN to address this growing challenge.

The President urged the international community not only to deal with the symptoms of conflict but also the immediate causes that fuel conflicts in the first place.

“There are no easy solutions to these conditions. They require long term investments and more effective international cooperation. In this connection, my delegation underscores the importance of promoting peaceful, unfettered, and inclusive participation of states in global actions towards conflict prevention.

“This will facilitate the achievement of the 2030 Agenda for Sustainable Development and the African Union Agenda 2063.“

On the issue of debt in the wake of the COVID-19 pandemic, the Nigerian leader urged G20 countries to extend its debt suspension initiatives to all developing countries, Least Developed Countries, Small Island Developing States facing fiscal and liquidity challenges.

The President also called for outright debt cancellation for countries facing the most severe challenges:

“The COVID-19 pandemic has increased the risk of new wave of deepening debt, where vital public financial resources are allocated to external debt servicing and repayments at the expense of domestic health and financing for critical developmental needs.

“I must commend the current initiatives by the international financial institutions and the G20 aimed at significantly mitigating the economic situation of the indebted countries and urge for more efforts in this regard.

“Therefore, there is an urgent need to consider expansion and extension of the Debt Service Suspension Initiative to include all Developing, Least Developed Countries and Small Island Developing States facing fiscal and liquidity challenges.

“In addition, a review of the eligibility criteria for debt suspension, including outright cancellation, is needed for countries facing the most severe challenges.“

The President also used the occasion of the speech to renew his advocacy for equitable distribution of COVID-19 vaccines, outlining steps Nigeria has taken to achieve ”moderate success” in containing the virus and halt its deadly onslaught in the country.

“Nigeria remains grateful for the assistance received from our partners and friends all over the world.

“Vaccination is the key to our safe emergence from the pandemic.

“We fully support the COVAX initiative from which we have benefitted. We also thank the United States of America, Turkey, India, China, European Union, and others for the vaccines provided.

“Despite the acknowledgement however, I would like to reiterate my call for a fairer and more equitable distribution of vaccines to all countries so that, together, we can fight and contain the pandemic.

“The rising wave of newer and more contagious strains, makes this even more urgent. No country can afford the socio-economic implications of prolonged shutdown. It is imperative to underscore that no one is safe until everyone is safe,” he said.

On Nigeria’s intervention to halt the pandemic, the President said:

“At the outset, we recognised detection and contact tracing to be important tools in combating the virus.

“In this connection, from a mere four laboratories with testing and detection capacities, we ramped up the facilities to over 140 centres today.

“Similarly, we built isolation centres and emergency hospital wards in record time all over the country. We carry out genomic sequencing in designated laboratories across the country with a view to detecting variants in circulation.

”In addition, over 40,000 health care workers have recently been trained on Infection, Prevention and Control measures with the support of various partners.

“Through the Nigerian Centre for Disease Control, we have established 16 infectious disease treatment centres located within our Teaching Hospitals and Federal Medical Centres,” he said.

On the fight against terrorism, the President told the UN General Assembly that the Nigerian Security Forces have recorded considerable success.

“As a result of the renewed vigour of Nigeria’s military, many terrorist fighters are voluntarily surrendering to our security forces,“ he said.

The President noted that while terrorism continues to dominate security discourse worldwide, in Nigeria, Boko Haram terrorists group, though fragmented by internal strife and weakened by our defence forces, is still active and preying on soft targets.

“Nigeria will continue to work closely with UN Counter-Terrorism bodies and entities with a view to bringing this scourge to an end, ” he said, adding that the country would spare no effort in addressing the challenges of terrorism posed by the activities of Boko Haram in North-East Nigeria and the Lake Chad region, as well as banditry in the North-West and North-Central Nigeria.

“I and three other Nigerian Heads of State served actively as peace keepers and Nigeria continues to support peacekeeping efforts. We know the sacrifice involved; we also know how important peacekeeping is for those in vulnerable situations.

“Nigeria will continue to play its part fully in supporting United Nations peacekeeping operations within Africa and beyond,“ he said.

On international trade, President Buhari called for reforms that will engender recovery from the COVID-19 crisis, build resilience to future shocks and pursue transformative development strategies that can deliver the 2030 Sustainable Development Goals .

“Nigeria reaffirms that international trade is an engine for development and sustained economic growth, as well as the global eradication of poverty.

“My delegation would like to reaffirm the critical role that a universal, rules-based, open, non-discriminatory and equitable multilateral trading system can play in stimulating economic growth and development.

“Fair and equitable trade would eventually eliminate the need for aid.

“My country and indeed all African countries do not intend to stay indefinitely looking for aid. All we need is a fair and equitable system of international trade,” he said.

The Nigerian leader also renewed the call for the reforms of the UN Security Council, stressing that intergovernmental negotiations on the issue was taking too long.

“No reform of the United Nations system is more urgent than that of the Security Council. Stakeholders around the world are asking how such power could be concentrated, with scant representation.

“The intergovernmental negotiations have taken too long, some 15 years.

“We must avoid going in circles. Consensus has been achieved in some of the elements of this reform, especially that of the representation of Africa on the basis of the Elzuwini consensus and the Sirte Declaration.

“It is unreasonable to expect unanimity in this matter. The issue, indeed, is about justice, not unanimity. Without justice, the legitimacy (even efficacy) of our Organization is called to question.

“We can and must make substantial, irreversible progress on Security Council reform in the current session,“ he said.

On the Palestinian question, the President encouraged Israel and Palestine to re-engage in dialogue based on relevant UN resolutions and Initiatives.

“The two-state solution has the support of the international community and is widely acknowledged as the path to lasting peace,“ he said.

“Nigeria remains deeply concerned over the illicit trade, transfer, and circulation of small arms and light weapons. Their excessive accumulation and uncontrolled spread in many regions of the world are having devastating humanitarian and socio-economic consequences, especially on the continent of Africa.

“It is on this note that my delegation calls for the world wide application of the Arms Trade Treaty to codify accountability in conventional arms trade, which is critical to the security of nations. This is in recognition of the need for a broad-based global partnership in the on-going battle against trans-border crimes, including terrorism and piracy.“

He also pledged Nigeria’s unalloyed support for multilateralism and faith in the UN as the pre-eminent body for solving current and emerging global challenges.

“Our organization is at the peak of the multilateral system.

“It is also the pre-eminent body for solving our current and emerging challenges, and for developing norms that are protective of us all. We need to re-commit to it, rejuvenate it to better serve us.

“Nigeria re-affirms its faith in the United Nations and is further resolved to continue to work with all Member-States for peace and security, development and the protection of human rights.

“In the current moment, hope for these, is dependent on how we assist each other to get Covid-19 out of all countries, regardless of their classification. We can and must do so.

“In this regard, let me close my statement by paying special tribute to a great and humane internationalist, and an exemplary practitioner of multilateral cooperation. I am speaking of Chancellor Angela Merkel of the Federal Republic of Germany. As she exits the stage, we wish her well,“ he said.