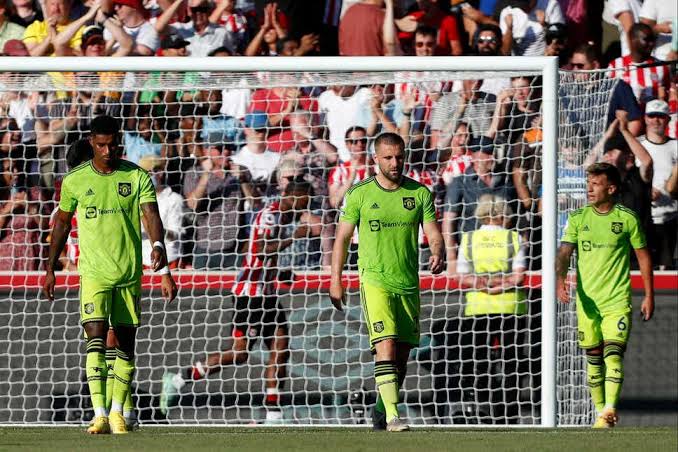 The Bees continued with their fine start to the season after claiming a four-goal-to-nill victory against Manchester United for the first time since 12th February 1938.

Okay.ng recalls that United had start the 2022/23 campaign with a humiliating 2-1 loss against Brighton at Old Trafford.

United’s calamitous afternoon began in typical fashion with David de Gea allowing Josh Dasilva’s tame, low effort through his hands and into the back of the net 10 minutes in.

The lackadaisical United defence then had their deficit doubled eight minutes later. Ex-Brentford player Christian Eriksen, who was booed by the home fans earlier in the match, was harried out of possession by Mathias Jensen after a poor pass by De Gea and the midfielder dummied and sent the United player the wrong way to slot home.

On the half hour mark, Brentford had their third. More poor defending saw United’s defence at standstill when Ivan Toney headed a corner back across goal, and Ben Mee outbattled Lisandro Martinez to head in from close range.

Thomas Frank’s side continued the onslaught and scored their fourth goal five minutes later. In a perfectly-executed counter-attack, Ivan Toney slid the ball through to Brian Mbuemo, who shook off a challenge and fired past De Gea.

“It was a horrible day,” De Gea said. “I should have saved the first shot and then the result may have been different.

“Other teams concede one goal and win 5-1. We have to react much better. It was a poor performance.”

It was the first time United had conceded four goals in the first half away from home in their Premier League history. Ten Hag’s side managed to stop the flow of conceded goals in the second half, but failed to convert their chances which would have restored some pride.