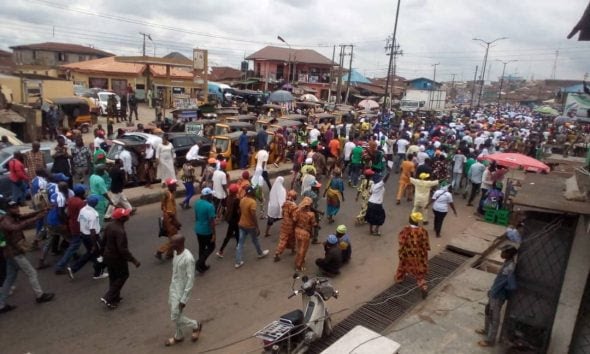 A score of the All Progressive Congress, APC, supporters in Ibadan suffered alleged auxiliary attacks yesterday, the chairman of the Park Management System, PMS Mukaila Lamidi in a reacting statement said it was an auxiliary attack.

Details sourced by Okay.ng reporters was that the auxiliary attackers were spotted in a somewhat light green SUV vehicle alongside at least 10 other vehicles, disrupting the APC supporters at Labiran junction which resulted in serious injuries on them.

Speaking with an eyewitness, he explained that the early response of security personnel hindered the Tinibu/Folarin supporters from being killed as they scattered them with tear gas.

In regards to the attack, a statement made by Yekeen Olaniyi, the media aide to senator Teslim Folarin explained that the incident was caused as a result of lawlessness and negative intentions which could heighten the tension in the state.

The statement reads: “It was unbelievable that when Nigerians are celebrating the emergence of Bola Tinubu/Kashim Shettima as the flag bearer and running mate of the ruling party for the 2023 presidential election, some hoodlums like Auxiliary were planning to disrupt the peaceful rally.

“I was surprised that Auxiliary could attack members from behind when he knew the candidates were in the front.

“As peaceful and law-abiding citizens, we won’t take laws into our hands. To this end, I call on law enforcement agencies to do the needful.

“Not minding the deadly attacks on our members by Makinde’s agents of darkness, we’re continuing our walk for Asiwaju Bola Ahmed Tinubu/Kashim Shettima. The injured members are receiving treatments at an undisclosed hospital.”

Though owing to the allegation, the PMS said nothing really happened, stating that the Auxiliary attackers were not present in Labiran or nearby the area at the time the incident occurred.

Emiola Jelili, who is the state Public Relations Officer, expressed that the PMS group had no proximal cause to attack or disrupt members of the opposing party APC since they were exercising their constitutional right to create such groups and rally about the town.

“The PMS reiterated that the APC opposition parties should desist from causing similar attacks and cease to involve in its internal crisis and affairs”.

“And it seems to become habitual that the APC supporters were fond calling Auxiliary every time they went to rally or even just to tarnish his identity.