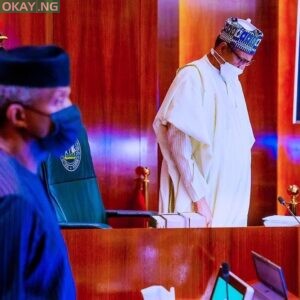 The Federal Executive Council (FEC), on Wednesday in Abuja, observed a one-minute silence to honour the victims of the Kaduna-Abuja train attacked by suspected bandits on Monday.
President Muhammadu Buhari presided over the meeting. It began with the Secretary to the Government of the Federation, Boss Mustapha, calling for a minute of silence to be observed in honour of the victims.
The News Agency of Nigeria (NANS) reports that the Kaduna-bound train left Abuja at 6:00 p.m., and was attacked by the suspected bandits at about 7:45 p.m., just about 15 minutes drive before Kaduna.
Eight persons have so far been confirmed dead, with 46 hospitalised and several others kidnapped following the attack.
In attendance of the meeting were the Vice President, Yemi Osinbajo; the Chief of Staff to the President, Ibrahim Gambari; the National Security Adviser, Babagana Monguno; the Head of Civil Service of the Federation, Folashade Yemi-Esan; among others.
Adamu AbubakarMarch 30, 2022
1 minute read
Facebook Twitter Pinterest WhatsApp Telegram Print
Facebook Twitter Pinterest WhatsApp Telegram Print
Advertise with Okay.ng |  Send news and press releases to Okay.ng | Get daily news updates on Telegram