43 Nigerians were deported on Thursday night from Germany, Belgium, and Italy for several immigration-related offenses and unruly behavior. 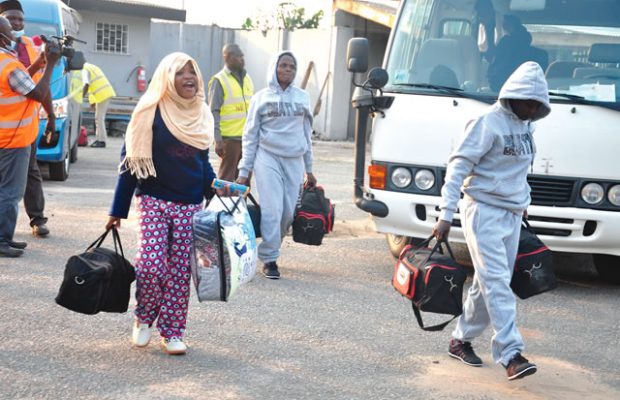 The deportees were received on arrival by officials of the National Emergency Management Agency (NEMA), the Nigerian Immigration Service (NIS), the police and several other agencies in deportation matters.

This is the second time within the week that Nigerians would be brought back into the country.

Earlier in the week, 171 Nigerians ‘voluntarily returned from Libya with a tale of woes after their attempt to cross to Europe through the sea and the Sahara Desert failed.

Commenting on the latest deportation, the Deputy Director, Search and Rescue, NEMA, Dr. Bandele Onimode, said the deportees comprised 33 from Italy; seven from Belgium and three from Germany.

Onimode who represented the Director-General of NEMA, Alhaji Mohammed Sidi said the agency would make sure the deportees were comfortable and ensure their safe return to their various destinations.

He urged them to stay in the country and join hands with others to develop it.

“They are coming back almost empty and this is a lesson to them to settle down home and be useful to their country. We will ensure that they are well catered for,” he said.

It would be recalled that on Tuesday, 171 Nigerians, consisting 112 females, 49 males and five infants returned to the country with lamentations.

One of the deportees who was allowed to talk to the media, Miss Gift Peters, 27, had lamented her sordid experience in the North Africa country.

She decried that many Nigerians especially ladies were still different detention camps and jails in Libya for offenses they knew nothing about.

She also revealed that she was lured into traveling to Europe through Libya by an unknown person whom she said is at large at the moment.

She had said: “I traveled to Libya about 11 months ago, but I was deceived that I was going to Germany, but instead, I found myself in Libya. When it was not in my mind to continue the journey, I asked him to take me back and he started maltreating me, they will do things that make you want to die.

“They will use hot electric iron to burn that person. They will even ask other girls to urinate for you to drink. My family was not aware of my situation in Libyan so I called my friend and told him the situation I was going through in Libya, and he took my matter to the station to arrest the man who took me to Libya, but whenever the police authorities checked on him, he would not be found, and I have since vowed that whenever I come to Nigeria, I will look for him myself.

“It was not easy for me in Libya, even now, several of our girls are right now in prison, the innocent ones, while the culprits are out there free. Several of them have even died; many did not survive the gunshots when they were catching everybody. Some people were shot at the scene, and some other died in prison yards. Many of my friends that went to Libya with us have died.”